NEW RELEASE: Learn about the updates in LOINC 2.72

For many years a test known as "D-dimer" has been used for the assessment of patients with DIC, and more recently, for the exclusion of the diagnosis of DVT or PE. The units used in expressing results are usually ng/mL or ug/L, so that a report might look like:

Occasionally, this expression is modified to read

With time, new test procedures have been developed, in which newer methods of analysis and of preparation of the test standard have led to the use of new "units" in expressing results. With these reagent sets, a report might look like

D-dimer = xx ug/L FEU, (where FEU is an acronym for fibrinogen equivalent units)

From a clinical perspective, the D-dimer test is potentially of greatest value in ruling out DVT or PE: for results expressed as ng/mL (= ug/L), the exclusion value is generally less than 250; for results expressed as ng/mL FEU, the exclusion value is less than 500, and these values are compatible with a rule-of-thumb conversion published by bioMerieux, July 2003:

So . . . now we have the use of single name for a test – D-dimer – but with results falling into two separate families. The difference between the two families is that the results differ by a factor of approximately two. This has led to a chaotic situation in the lab, and by extension, to the bedside, a situation in which both laboratory staff and clinicians are confused as to what "D-dimer" is being measured and reported. The world-wide web has dozens of references to the problem, and the CAP has commented frequently, with a series of feature articles in CAP Today (Feb 2000, Jan 2003, April 2005, May 2005, Summer 2005).

In LOINC terms, we have a component representing two different entities, with identical primary attributes (component, property, scale, system, time aspect and scale), differentiated only by method and units, both of which are very weak discriminators.

The fundamental problem is the lack of a useful standard. The International Society on Thrombosis and Haemostasis has had a subcommittee working for more than ten years on D-dimer standardization, without success, and it is said that a seat on the committee comes with retirement benefits.

The obvious solution to the problem is to have different names for the two "families" of D­-dimer. But what should these names be?

Contributing to the original problem is the unfortunate choice of the acronym FEU, for fibrinogen equivalent units. The inclusion of the word "unit" gives the impression that FEU is a unit in the metrological sense, whereas it would be more reasonable to think of it as a unit in the structural sense – e.g., a unit such as glucose in a larger molecule such as starch.

Given this interpretation, FEU may be more closely related to, or equivalent to the "component" (in the LOINCian sense), rather than to the metrological unit. In other words, FEU is the name of what is measured: just as the amount of glucose can be measured in a sample, so can the amount of FEU.

From this it is logical to propose that existing entries in LOINC retain the component name FIBRIN D-DIMER, but that a new entry be created with the name FIBRIN D-DIMER.FEU. In accordance with LOINC naming conventions, a dot (.) separates the analyte name from the "subspecies". This proposed name protects the connection with the D-dimer family, but efficiently separates it as a different entity.

The fully specified name would be

There is at least one precedent in LOINC for this type of component modification - see LOINC 4539-3, Erythrocyte Sedimentation Rate.Zeta.

The quantitative D-dimer entries in LOINC 2.17 are as follows:

These tables hint at some of the problems associated with the measurement of D-dimer, in particular the inaccuracy and imprecision, but also proved a convenient example of the problem under discussion: bioMerieux pioneered the use of the acronym FEU, but bioMerieux results are shown in the first, ug/L table, rather than the second, ug FEU/mL table. 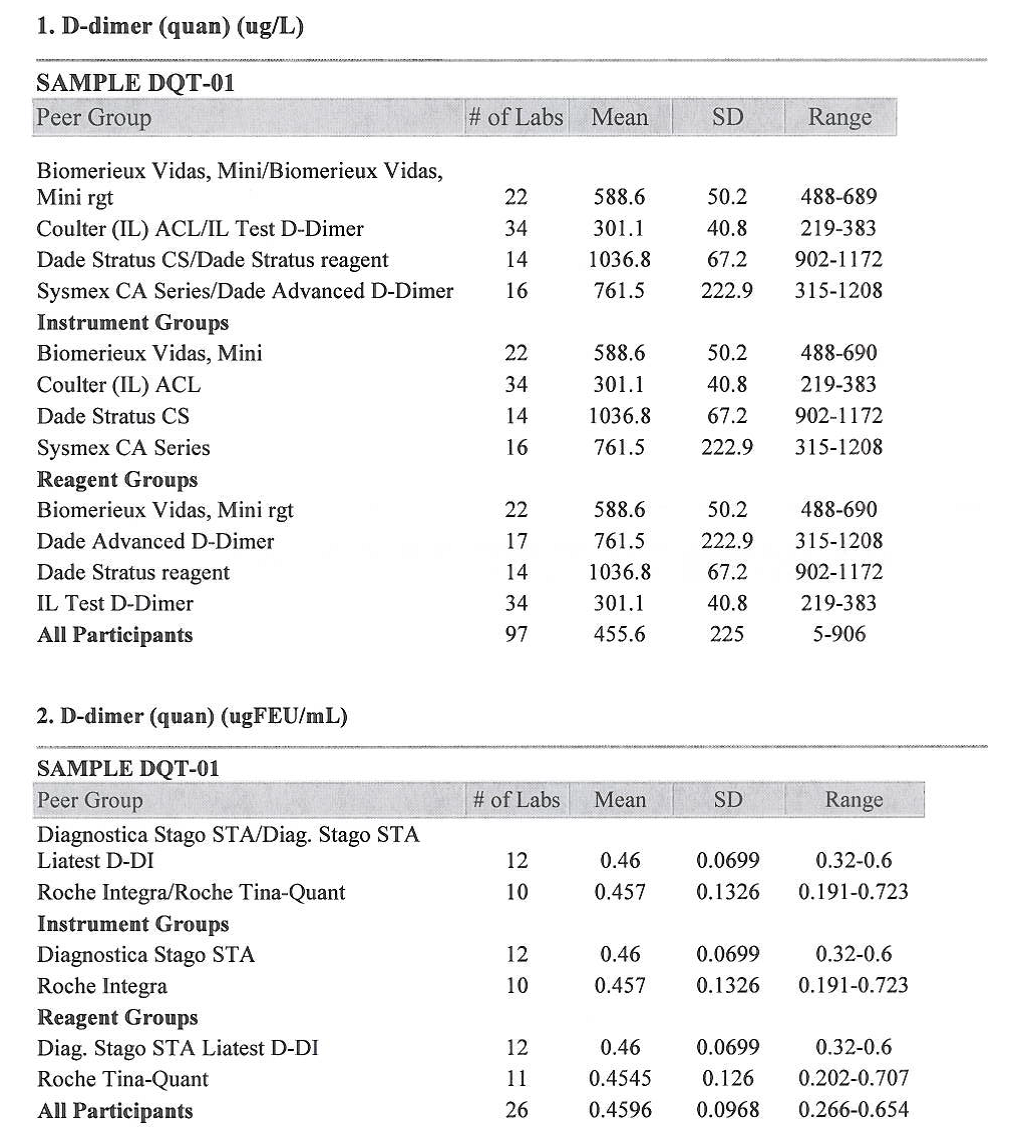